Sunshine: That bright stuff that comes from the blue sky and makes objects visible. That is a pretty basic definition of it, right? So why can't there be some when I have to run. I held off running until this evening today and what did I get? Grey clouds and rain!

Lollipops: Those delicious orbs of sugar that my kids slobber on and then try to hand back. Why does this get to me, I wiped their butts for how long? Something about slobber just makes me say, "Never mind, it's yours." (Kid response: "Really!?! I love you Mommy.")

There was sunshine, there were loolipops, but there were no rainbows - so I won't go on!

This past week the twin boys - D & Z - and I grabbed a meal on the run. Inside the meal for the kiddos was info on the Guiness Book of World Records. Now, the boys decided the guy who holds the record for stretching his ear lobes the furthest is a superhero - and his name is (of course) Super Stretchy Ears.

So, I asked them what their super hero names were (hey, they're 4 - they can dream!) Typical guy response is what I got --- ( I am SO embarassed, and yet I will tell you) Z told me that his super hero title is "Super Stretchy Penis" - Oh, lord.

Now, I had to look up and see if there was a world's strechiest penis - You know I need to tell the little man what he is up against. First, though I found another disgusting "ears" record - and Mr. Radhakant actually thinks that all this ear hair is a blessing - I am not sure that I agree with him. Fortunately (I think) - all I could find was a record for the Oldest Penis - don't worry - it is actually a fossilized daddy long legs who holds the record (THANK GOODNESS!).

Now that you have had a few laughs about my conversations with my 4 year olds - let me give you an update on the running. Although I am well into the first month of training - 4 miles is just starting to seem easy to me again. For those of you who don't know me personally - I use to run daily - and I have never been a waif. Since then though, I have had another set of twins, a single baby, and 2 broken ankles. Needless to say - my relationship with running is in the love/hate stages right now. (I love the results & effects, Hate the sweating and muscle soreness) This weeks mileage went well and it is fitting into the new "work for free" schedule that is required to complete my college degree. The only difference is that I have moved my long run to Sunday - So, pictures tomorrow of my wonderful 7 miler.

A few predictions: My face will literally be beet red in the after photos, you will be glad they are pictures so you won't smell me, and I will forget to pick up more blister block bandages so I will complain about that.

Just another Manic.... Crap it's Tuesday!

That's right - I actually wish it was Monday again. It is Tuesday and I feel like I accomplished ZERO - GRRRR!

Monday - worked for free for the government, but at least found some job openings.
Tuesday - worked for free with 4 year olds (36 of them!) - got green paint on me right before I had to come do an English Western Lit. TEST! - Oh yeah, and over their nap time - I stood in line at the DMV!

John is the BOMB! Man, this man is good to me! How did I get so lucky?

Since he is a chiropractor - he has been hooking me up with adjustments after almost every run. Whether it is my shoulders (why are THEY hurting - isn't it my legs taking the pounding? ~ Really, I already know the correct answer to this.) or the legs, or my back - he is making it all better again. My own little secret weapon in completing this marathon training.

What is it that I wanted to use his chiropractic table for today? A NAP! I kid you not. I am blasted tired.

So, will the alarm clock wake me up tomorrow? Only time will tell.... 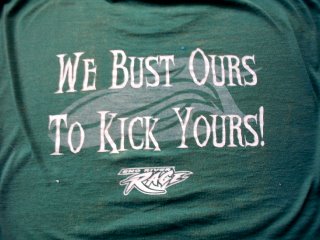 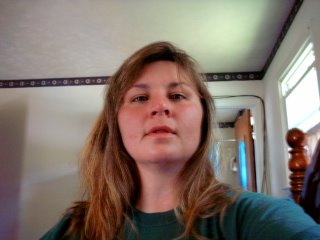 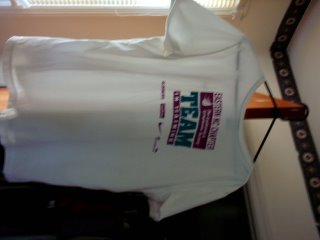 The Photos: the first one is of the T-shirt I love to wear. Johnathan traded one of the Fort Bragg Rugby Club's shirt to one of the women from Eno River. I just love the saying on the back- If you know me, then you know that this pretty much fits my personality.

Picture of me is after the 6 miler this morning and post-shower. Hair just out of the towel and I still haven't combed it!

Finally the sideways photo is my official Team In Training training shirt. I guess Nike is generous enough to give us their microfiber shirts - sweet! I am actually scared to wear it when I run outside - Dude - I sweat A LOT! THe humidity and distances do not make for a crisp white shirt for long.... so far, so good though!

Continuing my saga of training for the Walt Disney World Marathon on January 7 ~ Today I ran 6 miles. It went pretty well! The trail was still the Cape Fear River Trail and the only thing bad about running on a Sunday morning there is that the water on the path isn't ice cold. I guess the guy who rides his golf cart around refilling the coolers with ice and the port-a-potties with TP goes to church - or sleeps in. Either way - it wasn't too bad. The trail did flatten out a little bit in miles 2-4, but again the first third was a good warm-up with a bunch of down hills - and the end had me pushing it. However, today was different - not only were there hills but there was also a "friendly dog" who had broken his owner's leash. By friendly - I mean that he was in love with me and no matter whether I ran, walked, sprinted, laid down and acted like a dead fish - he wanted to be with me. So, I ended up running the last hills (killer monsters) just to get it over with.

Needless to say - I am now sitting in the office icing my shins - but other than that everything is peachy keen! And I am going to the pool or hot tub later - we'll see how the shins are doing as to which one it ends up being.

Oh, and the new shoes have given me a blister on my heel and John used all my blister block band-aids. GRRRR....Help! Need the address to send them to? Check out: My TNT site
Posted by Unknown at 9/03/2006 No comments:

My pal Eric, the guy who worked in the cubicle next to when I was in Baghdad last year, blogged on something the other day that just completely pushed my "ROAR" button.

Johnathan and I were just talking about this the other night as well - the whole "Katrina Survivor" issue, for we had caught an interview that was on the evening news.

Here's the jist of it: A man who used to live in New Orleans now lives in Raleigh. He was talking about how the effort to clean the city up, his neighborhood, etc. is taking too long - that nothing is being done. Then he went on to say that he has only been back once for what amounted to just over 24 hours. He hasn't gone back again and won't, he stated.

Here's my take: Are you 4? Did you never learn to clean up your own mess? Dude - it doesn't matter if Mother Nature caused it. I don't care if you don't want to live there anymore - I wouldn't either. However, you still have a responsibility to get back to your place and clean your area up. (My goodness, I say exactly that on the mornings my 4 year old twins don't clean up their breakfast spot.) So many of the "Katrina Survivors" have that same story - their whole complaint is that somebody else hasn't cleaned up for them. WHAT A CROCK!

Furthermore, your lack to clean up your area, land, flooded apartment - whatever - should result in some kind of action. Failure to return and clean it up is resulting in countless volunteers being exposed to the excessive mold, mildew, bacteria and viruses that can grow in those conditions. I agree that it is disgusting - but equate it to your child being sick - you still have to get out the mop or the towels and clean up the mess - you don't just leave it sitting around. And yes - I get it, It is Hard! - Economically, emotionally.... that still isn't an excuse. As my father told me time and time again - "Life isn't fair." (and "You mess with a truck, you get ran over.")

I'm not saying the situation doesn't deserve your neighbors assistance, however, How dare you expect them to do all the work for you. The only real survivors are those that are still there, cleaning up, re-building. Bottom line - your not a survivor - you simply abandoned the society and community you were suppose to be contributing to. You are the social equivalent of a dead beat dad.
Posted by Unknown at 9/01/2006 2 comments: