I don't know if I have ever been so excited by the idea of mail.  Maybe as a child- especially when my grandmother would send me a new post mark or when a package came from my Aunt Buffy.  But right now, I am exstatic about the idea of a couple of boxes actually arriving here.

Let me give you a little bit of back story.

In December 2012, my mother mailed two boxes to me.  Previously my husband had received packages here in Malaysia with no problem - some from me, some from his family.  The only hitch he ever encountered was the customs bill.  Otherwise - it has been no problem.  However, in the case of my two boxes... they never arrived.  When I inquired with my mother about them in late December/early January, as I had allowed some extra time for holiday shipping, she responded with the tracking numbers.  So - onto USPS.com I went to track the packages.  What did my little eyes see?  The address could not be confirmed and they were being sent back to the US.  WHAT???  I quickly started in with phone calls, emails, more phone calls...  Things weren't simple.  First there was the language barriers.  Most personnel I first talked with were a bit hard to understand.  I had only been in country about a month and my Bahasa Malay was nil.  They personnel on the other end of the line were very helpul though - would call over someone who spoke English a bit clearer for my benefit.  They gave me numbers and names to call, email addresses to send info to... all to no avail.  The packages were already on their way back to the US.

This time though - she put the hubby's name on the boxes.  His packages seem to have no problem getting through the guards at our building.  Additionally, I am now tracking their every move.  Not just sitting back and waiting.  I will know when the arrive in country and will hound everyone about my packages every day.  (Well, maybe not hound, but they will know that I am here, am expecting the boxes and that this is a real address to deliver to.)

The thing is - I have new shoes in those boxes.  Now, I am not a shoe freak.  It is just that I have yet to find even one store that has shoes in my size for women.  Shoe shopping is one thing I will do when I return home.

I have new bras in the boxes.  Again - I have yet to find a shop that makes beautiful holders for my womanhood.  So, bra and shoe shopping is on my return agenda.

I have new dresses in the boxes.  There is tropical weather here and I know I will love these dresses and wanted them a few months ago.

The kids have items in the boxes, too.

Just knowing they are on their way is SOOOOO exciting to me.  I am having a hard time getting to sleep each night.  I will be so very appreciative when these boxes arrive.

My Daughter, His Son

So the hubby has this burning need to have a son who plays rugby.  Well, I gave him two sons - twins none the less.  It was his job to then instill in them the desire and need to play this sport that he loves so much.  Daddy-o's dream was to have a dynamic duo that would make all other rugby fans and players take note and need autographs wherever they went...

Well, after years of prodding, "mentoring" and begging... neither of the boys really like rugby.  One of the twins told said father about this decision a month or so ago.  Said father was grumpy for the rest of the week.  The other twin likes rugby, but doesn't love it.  He likes to go practice, but isn't so big on playing in matches.  The other twin dropped this bomb on his father this week.

I could see grumpy daddy coming back - the kids don't like him and neither do I.  So, half-heartedly - I reminded soon-to-be-grumpy-daddy that he could still share his love of rugby with the one little rugger he had left - our daughter.  Well, she does LOVE rugby.  She loves all aspects of it - tackling, running down boys bigger than her and trying to (and often succeeding in) taking them down, learning the defense... you name it - she seems to just eat it up. 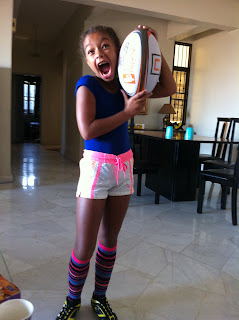 This morning she was so excited about it being a rugby pratice day, I just had to snap a picture.  My daughter is my husband's son... when it comes to rugby.
Posted by Unknown at 3/16/2013 No comments:

Well, living in this new country has us in a conundrum on a weekly basis.  A few weeks ago, we finally got the popcorn topping the hubby likes.  (He had to bring it back from the US with him, as we have not been able to find it here.)  So that presented the next challenges - Finding Popcorn and Learning how to Pop IT!

Well - I quickly found a great "recipe" or directions for homemade popcorn.  Seriously, I can't believe I had to go look for one, but I wasn't sure on the oil to kernels ratio.  The one I found is great.  It has you heat the oil with only a few kernels in the pan, then when they pop - you add the remaining bulk of the kernels - turn off the heat for 30 sec. - then resume heating/popping.  It works like a charm!  We have VERY FEW unpopped kernels.  (We used sunflower oil - in case you were wondering.  3 Tbs to 1/3c. popcorn kernels.)

I have become accustomed to microwave popcorn.  Before I began microwaving popcorn (what? 20 years ago?) we had an air popper.  I don't know that I have ever popped popcorn from scratch in my entire life before this.  The kids just think it is great that it still pops up like microwave popcorn and love that we make it so that the lid starts coming off the pan as we near the end of the popping.  They love seeing that huge pan fill - and almost overflow - with fresh, piping hot popcorn.

Add dried cranberries - and I am one happy momma!