Dazjah is saying, "Good Morning To Everyone!" She also wants to know why you all won't meet her at Chucky Cheese. (Beside the fact that even I do not like Chucky's house of greasy pizza.) Here is her beautiful outfit for today. She says that tomorrow she is going to wear her tap costume. You will love it because is it is black and white and pink. Those are all her favorite colors and it is one of the costumes she wore in her first recital a couple of months back.

Dazjah (she insists that her name is in pink) comes to work with me now that the boys are back in school. First grade is going well and they are progressing quite nicely with their spanish vocabulary and spelling. Last week was their first spelling test. So, everyday we had a little mock test to help prepare them for it. The word they were to spell was 'tengo'. Divon had finished writing and Zephan was sitting there pondering. I looked at his paper; he had written "ten" and was looking up into the air and tapping his pencil on his chin. After another 30 seconds I finally said, "Sound it out. What do you think comes next?" He did it and sat there thinking again. A little frustrated because he was making the 'g' sound I said, "What is it, Zephan?" He said, "I know it's a 'g' that comes next but how do you say that in spanish?" I reminded him how to say the letter 'g' in spanish and was bursting with laughter inside. 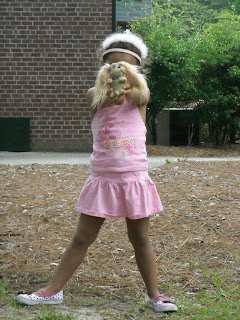 In addition to the obvious insult, here are a few other reasons you might call someone 'Dog Face.'

2) You make a dinner so scrumptious that when you come back from getting more water out of the fridge you see all your children licking their bowls.

Well, yes - both of these have happened to me within the past 24 hours.

DD dressed herself this morning and pulled it together very nicely. She added the tiarra (there is more than just the fur, it is just further back on her head) after I arrived at work. She loves this picture. I prefer some of the others that are on the flickr collage to the right. Have a great day Dog Face!

For my family and friends who do not know a lot about blogs here are some additional pointers.

1) You can see pictures of my kids when they were younger (and of me when I was in the Army and the years since) by clicking on the various years to the right of the text.

2) You can view the blog in reverse chronological order by clicking on "older posts" at the bottom of the multiple posts (text entries) on this page - and each subsequent page.

3) You can leave me a quick note by clicking on "comments" under each entry. Each entry is dated. 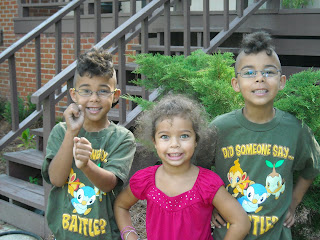 Many of the afternoons this week have been filled with thunderstorms. Thank goodness because we need the rain. However, it causes problems with my little jumping beans. Divon and Zephan go crazy when they can't get out and play. So, this week I have heard the shrieks of "Mom, he's trying to kill me!" and, "Mawwwwwmy, why can't we GO somewhere?" The boys' t-shirts say it all: Did someone say BATTLE?

This was one afternoon earlier this week. The one good thing that has come out of this: Dazjah has discovered the love of the movie Mary Poppins. All three of the kids love when they ride the merry-go'round horses and have the fox hunt. The boys also like it when Michael gets hit by the puff of black chimney smoke when they are on the roof tops. They made me replay that one over and over. Zephan giggles just thinking and talking about it.
Posted by Unknown at 7/26/2008 1 comment:

Ok - It has only been a year since I last posted. Not too shabby!

Dazjah is now 4 1/2 - she makes sure everyone knows there is an extra 6 months to her age. Like a good balsalmic - every month counts! Last month she had her first ballet and tap recital. She loved her costumes. The ballet one she has named "cotton candy." The outfit is the same color as pink, purple and blue cotton candy - so the name suits it! The other one is just her "favorite." Why is it her 'favorite' you may ask? Well it has a white tutu that has black silk ribbon on the edge, a black with white polka-dot bodice and a bright pink ribbon that ties into a bow in the front. Add the tap shoes and you have one spunky little tapper. She loved performing - many of the people she invited, her preschool teacher, Ms. Kelly from my office, and Nanny brought her flowers or gifts for after her performance. She did a great job though and has moved up to the next age group - a little early, but not yet ready for broadway! 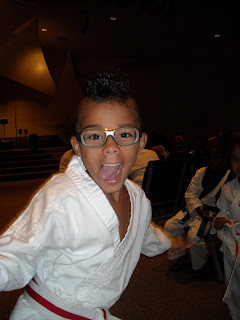 Today all three kids had their "testing" for their next belts. Dazjah had taken 6 months off because ballet, tap, school and karate was just too much for her. But she started back after school finished and is doing great. Divon and Zephan love it. Typical boys - if you can chop, kick, bust, or 'hi-ya' it - they are all for it. On the left is a picture of crazy Divon. Yes he has a mohawk - yesterday it was a bright red mohawk. However, after running to the store yesterday evening, I came home to find my deck painted red, pink and blue - so there is no red mohawk today! (Bet you can't guess what color mohawk Zephan had, or what color pigtails Dazjah was wearing. - Hint, Zephan 'knows' pink is not a boy color!) All three are still 'Tiny Tigers,' so although the center of their white belts are red or orange - they are still white belts. They train right now for discipline, health and to learn the basics. As fall approaches Divon and Zephan will move up to the 'real' class. That is, they will train to get an all yellow belt, orange belt, green belt, etc. Right now they know simple sparring and one step forms. (They also know a couple 9-12 step forms that they have done for tournaments!) But as they move up the forms will get more technical and longer.

Today though - they broke their boards, got new belts and are very happy campers! 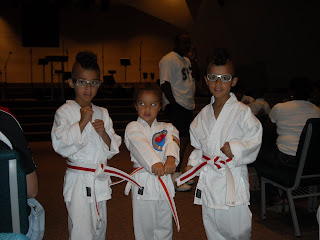