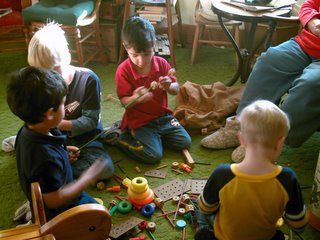 Here's the kiddos, plus their fair haired cousins, sitting around great-grandma's slippered feet playing with Tinker Toys. The funniest thing... that day my kiddos played with quite a few toys that I played with at my grandma's house when I was a kid. Right now.... I can't even think of a toy that is going to leave my house in anything other than a garbage truck. Ok, some of the outside toys I will give to someone else because the kids grew out of them. However, my point is that it is true... most toys today don't make it through their first year. Maybe I am just purchasing the wrong versions... I need to go back to the wood stuff that took some power to break, all the plastic doesn't seem worth it.

The picture was taken on Christmas Eve day - this picture doesn't show the full effect, but my children really make my sisters boys look like albinos. She has the fair skinned, blond headed lil' cornhuskers. Mine are the two that are going to be tall, dark and handsome! hehehehe! That day - Tinker Toys rocked! I hadn't even thought about getting them for the boys. My grandma takes the cake!

Today (in Norfolk, Ne): Good day despite the weather. We went to Kings Lanes... who told us we couldn't bowl because their computers were down. What a crock - remember the old way... gotta' paper and pencil? Whatever, the kids were so mad that we ended up taking them downtown to walk around. Johnathan and I figured the wind would be blocked by most of the buildings and we were right! (Score one for mom and dad.) We went in to Anderson Bicycle and Fitness - they rock! They let the kids get on the bikes to try them out, fitted all of them for helmets (even though they knew we wouldn't buy little girl helmets for the boys - they were out because of the Christmas rush), even pushed them around their indoor path in the tri-cycle racer thingy. It was a cool little contraption, but bicycles are their newest love. DD did get her helmet though - man she is cute with those ringlets sneaking out from under the ends of her helmet and that big cheeser smile. And they had just sold their last 16" boys bike - otherwise John and I agreed that they would have had our business because they were so customer centered. Sure they cost more than Wal-Mart, but they were a couple (with his little girl on his hip 90% of the time we were their!) who knew their stuff and were down to earth. The down to earth part is one thing that seems to be really hard to find when talking to a wally world employee about their bike selection.

We have just over a week to find the perfect set of bikes for the boys birthday. Wish us luck!! (We thought we were being smart and waiting until after the Christmas rush - everyone seems to be sold out in what we are interested in... minus one mom and dad!)
Posted by Unknown at 12/29/2005 2 comments: 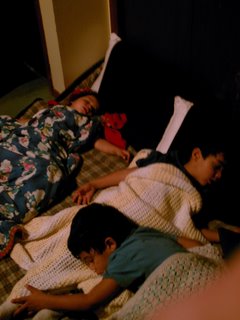 Santa just keeps coming when you visit all your relatives that you haven't seen in 3 years! This week has been very busy... first we traveled the million miles from North Carolina to Nebraska with 3 kiddos in a minivan. Yep, and we still have to go back...YEAH!! Actually, they did pretty well with the help of a VCR, some rest stops that have up-graded to include playgrounds, go-gurts, grapes, cheerios, chex, PB&Js and of course - the coolest traveling momma and pappa that any kids could have! Our first stop was in Omaha - at my sister and her family's home... she even left the door unlocked for our 3 am arrival while she was out doing the middle of the night shopping that she does every December 23rd. After a quick nap and a much needed shower we were off to the first of the festivities... Christmas Eve appetizers at my grandmother's. I love my grandma's house... she collects dolls, plates and stamps, has lots of plants in full bloom in the middle of a Nebraska winter and has a lot of very cool glass/breakable objects and furniture. Also, very fortunately, I think she is one of the few grandmother's whose house does not smell like an old person or moth balls! - Love Ya' Grandma!
So after some soup and other hors devours - we opened some presents.... one of which was from my now official husband-to-be!! That's right - for all of you that were wondering when it was finally gonna happen - we are officially engaged! Santa whipped him until he got down on that knee pleaded for me to take him as-is with no warranty! What else could a girl say - YES! So, I now blog to the world with a ring on my left hand!!
The kiddos got some great presents - and then we were off to see a bigger portion of my Nebraska/blood and marriage related kin-folk. Some I hadn't seen in a good 5+ years... so I had to watch for who they called grandma to figure out who they were.... Others - man they looked just like their mom or dad did when I was a kid. And after all that excitement - we packed the kiddos back in the mini for another hour ride to my mom's house.
Now the part I left out was that my dad had just been released from the hospital on the 24th - after 2 weeks in the clear liquids administering joint - he looked a little pale.... however, I can tell you all that being home has done him a world of good. He is looking more and more like he was never in there and I think that in another week - nobody will be able to tell the difference!
Well, that was the start of our journey to the middle of the country. I will just fast forward to today.... we awoke this morning at a lovely 7 am - a much needed time change from the wonderfully rousing version of "Mommy won't let me watch Polar Express again" that Miss DD sang to us in the key of high screaming C at 3:17 am yesterday. (Yes, there is no joke or lie associated with that statement.) I then proceded to the eye center to try to fix the frames that Zephan broke. No Luck! Then we did a quick drive by at the dollar store - if a $1 toy keeps them quiet for a day - YAY me. Then onto my daddy's farm. I dropped of the boys - John, Divon and Zephan. DD and I went to get our hair done. OK..... John's kissin up on his newly groomed fiance - so MORE LATER....... But as a final note, this is how the kiddos ended up tonight!
Posted by Unknown at 12/29/2005 No comments:

Twins do not compare to what this little girl is up to! This picture says it all... she is so cute, chubby cheeks, Shirley Temple curls, big blue eyes.... the spider man cup that she will scream and cry for, "No, mama. You get it NOW!" if it isn't handed to her. That isn't saying she always gets it...but boy does she make the noise in the house.

Johnathan and I knew we were lucky with D & Z. Zeph never really threw temper tantrums, and Divon's version was to lay down on the floor with his hand covering his face.

DD goes all out and shows us what little girls really are made of... you know that cutie pie crust with a lotta' attitude in the tartly sweet filling. Man, she is gonna run through men... if there are any around to keep up with her. Thank goodness Daddy and I have a couple of years to prepare for that.

Oh, and for those who want a little chuckle.... last night (Johnathan was out of town for a weekend of CEU attainment - fun!) DD woke me up at 1:27a.m. to tell me I had to take her down stairs to watch a movie - Robots. I think she would have went by herself if I had at least left a path of breadcrumbs, but bad mommy forgot to crumble those before hitting the sack. Needless to say - a little after 2 a.m. I gave in... I pulled the guest mattress out of the guest bedroom, set it in front of the couch - and we camped out there for the remainder of the morning. I slept, DD watched at least 1 movie.
*** and yes, you know those lips know how to do a proper pout!